This web page was produced as an assignment for Genetics 677, an undergraduate course at UW-Madison. 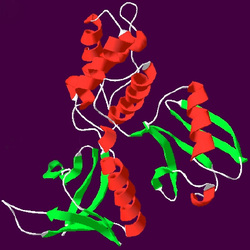 FRMD7 contains 714 amino acids in its polypeptide chain [Accession Number: NP_919253]. The specific function of FRMD7 is not well understood but several studies suggest it plays an important role in neuronal development, particularly in regions associated with ocular movement. The most common mutations in FRMD7 are point missense mutations that cause an amino acid change at that location.

In both the human and mouse embryonic brains, FRMD7 is specially and temporally regulated, and in culture the protein is strongly associated with the growth cone of developing neurons [2]. What this means is, a mutation in the FRMD7 protein can lead to stunted axon growth and immature neuron cells. This can lead directly to infantile nystagmus since FRMD7 is associated with ocular movement.